It amazes me how we can push ourselves in a race, and then be hobbling around within minutes after finishing. This is what usually happens to me after these 2km swim/90km bike/21.1km run races, most commonly known as the half-ironman distance. For me, my second one in three weeks and last of the season (thank goodness!), was a, as expected, tough day! After a post-race day of total uselessness and complete mental and physical depletion (thanks kids for enjoying two rainy day afternoon Monday movies with me and bringing me Kleenex when the tears flowed during Black Beauty!) I am feeling much more recharged today!

For my second time at the Great White North triathlon, I got my wish from last year, a dry, mostly sunny day. However, the difference this year was a new course, with changes including a one-loop swim (although apparently it was as much 300m too short of 2km), a two loop (or rather out-and-back) bike, course, and a two loop (out-and-back mainly on the paved cycling paths) run.

This year race start was at 7:30am so after less than 6 hours of sleep I was still feeling groggy before go time. I was also still in the port-a-potty line up when they called everyone out of the water at 7:10 saying the swim warm-up was over, doh! I guess I wouldn’t even get a warm-up to help me wake up! No matter, at least I still had time to get my wetsuit on and get down to the beach! And the positive was that the water was warm enough that is wasn’t too much of a shock to the system to dive in with hundreds of others and start swimming like crazy to keep a straight line and not get clobbered in the head too many times! On the 900m stretch to the first buoy things got pretty chaotic about half way there when everyone merged together where a little point of land stuck out into the water. The buoys were hard to see with the sun and I felt like I kept getting boxed in behind people. A not very smooth or straight swim to say the least! On the way into shore I also went too far right and was yelled left by the volunteers in kayaks. Finally out of the water, I was happy to be rolling on my bike but my legs weren’t feeling great.

Annette got out just in front of me but slowly lost me and gained about 3min on me by T2. A newcomer to Alberta, and to triathlon in general, Karen Thibodeau (3rd in 2012 at Ironman Canada and this year’s Victoria Half-Ironman winner), already had at least a five minute lead with her mad swimming ability, and she only gained time on the bike. Meanwhile with lots of cross winds and rolling hill it felt hard to find a rhythm for me on the bike and to stay focused. One plus of mountain biking, there is no time to forget you are in a race with all the excitement the trail alone brings let alone the competition. So hands down to all the road triathletes out there who do so many of these races in the not so comfortable TT position staring at pavement for hours at a time. During temporary lapses of focus I was thinking of when I might sell my TT bike, ha, but focused on pressing on! 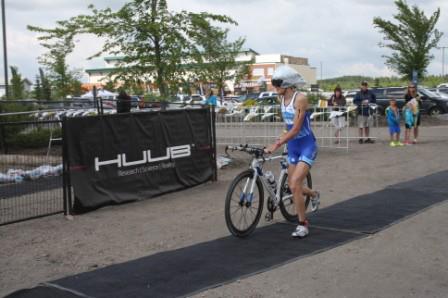 Into T2 finally 2h36 minutes later. My amazing ball of energy friend, Suzanne, who though injured at the moment, made the trip with Coach Cal and I as moral support! As I struggled to get my run bag gear open, she let me know I was in 8th place and 13 minutes back. Ooooookay, must be a worse day than I thought. Turns out there were some relay team women in the mix and I actually was starting the run in 5th place. Some work to do regardless! Well, turns out my run legs seemed to be working fine. By the about the 13km mark I had moved into 2nd place (though I still was confused and thought I might be in at least 3rd until after I crossed the finish). I managed to cut 6 minutes off of Karen’s lead with a 1:24:29 run so I was happy I still had the energy/fitness to do that at the end of a long race. I also timed it well and crossed the line just as the sky opened up with a whopper of a thunderstorm downpour, nice!

Congrats to Karen on the smashing win, and to the rest of the ladies on the podium: Lindsey Adams in 3rd, Kristina Schultz in 4th, and Sharon Styles in 5th. Congrats also to my amazing coach, Cal who finished 8th overall in the men (he is not slowing down one bit at age 45!!) as well as the 20 other CSR athletes who raced, many of who set PB’s for the distance! It is so much fun to know and cheer so many others on course, the fun of racing local!

I was also excited to win to ATA Iron Challenger for some extra cash, and a great way to promote racing locally in Alberta!