Meet Sharon Styles, a coach (Team TriLife), runner, triathlete, wife and mom of two teenagers from Calgary, Alberta. While our paths crossed in Alberta such as at the Great White North triathlon in 2013 (pictured below), I unfortunately didn’t get to know much about Sharon, until now! Thanks for sharing your story Sharon, for another awesome perspective and great tips for balancing it all. Read on for another dose of momthlete inspiration as she talks about athletic pursuits with teenage children in the family! 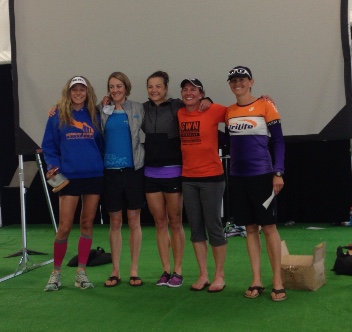 1. What was your life as an athlete before and after kids? And how has it evolved as your children have grown?

I discovered I was a decent distance runner back in junior high, doing those dreaded 12 minute run tests.  I joined track in junior high but really started to love running in high school.  I competed in track and field and cross-country running in high school as well as some competitive swimming and cross-country skiing.   I went on to run track and cross country with the University of Saskatchewan.   After my daughter Ayden, now 17, was born I made the transition to 10km road races and continued to race at that distance after my son, Liam, now 14, was born.   After having to take a year off of running due to injury in 2005/2006 I decided to give triathlon a try in 2007 and was instantly hooked.   I started out with some sprint distance tri’s and quickly moved up to the olympic and half iron distance races where I found myself enjoying age group success.  Over the past three years I have seen huge improvements in my racing and I’ve become more competitive, investing more time into training as well as improving my health.

I feel like being a runner (now a triathlete) was a huge part of what defined me.   Being a healthy mother is a vital part of raising a family and running was simply a part of my daily routine and a healthy lifestyle.   Making time for it was as important to me as brushing my teeth.    I feel the same way now 17 years later, not just because being an athlete is a big part of what I am ( I love training and racing) but also because I value being fit and healthy.   I love that,  with my husband, I have set an example for my children on how to maintain health and fitness throughout your life.

I stayed active throughout my pregnancies, with easy running in the early months and transitioning to cycling and walking in the later months.   I kept my workouts fairly easy.

Over the years my training and racing has definitely become more serious.    When the kids were small I stuck to running only, which made it a lot easier to get workouts in because you can take the kids with you most of the time.  I hauled my kids around in a double chariot for quite a few years!  When my daughter started riding a two-wheeler she would ride along side or sometimes we would even hook the chariot up to her bike and she would pull her brother while I pushed.   As they got older and grew out of the chariot I often ran small loops around our rural property while they played outside or I would get it done on the treadmill.  Even on gorgeous days I remember doing  trainer rides on the deck while the kids played in the yard.

Of course now they can look after themselves when I go out training, or if I am really lucky they will join me on a run.

In 2015 my goal races are the Wasa Lake Triathlon, Great White North Triathlon and ITU Worlds in Chicago where I want to defend my 2014 age group Gold medal.  I want to continue to get faster in 2015 and hope to improve on my Olympic distance and half iron distance pr’s.

In lots of ways training and racing with older children is even harder than when they were younger.   Timing seems to be everything, from weekly training volume to the big races.    I am a running and triathlon coach so I do some of my work from home and train during the day while the kids are in school.   Evenings and weekend are full of sports and extra curricular activities.   Saturdays have become one of the hardest days to get a training session in.  When I train during the school day I will often take my laptop with me to practices and work where ever the kids are.   I will also fit training sessions in during kids’ practices, running, swimming or cycling during volleyball, soccer, baseball, track, guitar….  I have worked out in a lot of different venues, including vacations.  My kids always joke how mom turns relaxation into workouts.

When it comes to racing there are only 2 or 3 races I firmly commit to, and I don’t travel far for most of them.  The rest of my races I try to work around the kids schedules so I can be there for their important games / tournaments / meets.

Of course it helps to have a supportive spouse!  My husband Marty, an avid Crossfitter, is able to be sports dad x2 when I head away to race.   Of course if the crew is free, they are there to cheer me on for the bigger races.   When I recently competed at the ITU World’s in Edmonton they were there to cheer. Nothing meant more than having them there to celebrate with me. 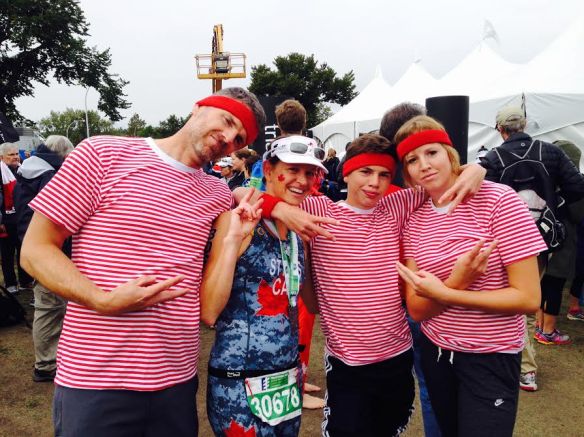 Sharon and family at 2014 ITU Worlds in Edmonton

Make your goals and fitness a priority, but within reason.  Keep it simple.  Your teens need you around, even though they would disagree.    Sure, they don’t want to talk to you 75% of the time, but you can’t miss the 25% when they do.  I want to be at their special events as much as I want them at mine.    I want them to know they are more important to me than racing, and yeah, I do love them more than I love my bike, despite the jokes

Be flexible….   Know that sometimes your workout needs to be done between events and that the other parents will get used to seeing you in spandex and not smelling all that great.    Sometimes the Saturday long run has two options, 6am in the dark or 6pm in the dark, and you make it work.  If you planned on a 1 hour work out one day and only had time for 20 minutes, that’s OK. The benefits to your mind and body are incredible even without the volume.

Menu planning….being on top of this is so important for both you and your family to eat healthy.   Planning meals that  can be eaten on the go or that you can throw in the crock pot help a ton!

Invite your kids to train with you.   They might say no 9 times out of 10, but on that 10th time, you will share something special. 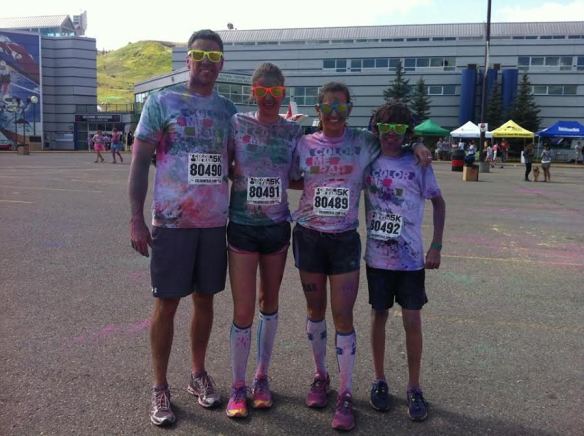