My story as the “athlete” began as the only 9 year old girl on a soccer team full of younger boys. There was also one boy on the team who was two years younger, my brother Geoff. With no girls soccer teams at that time growing up in a then small town: Courtenay, B.C. on Vancouver Island, the boy’s team was my only option. I guess it was also convenient for my parents that my brother was skilled enough to play up an age group and have us both on the same team. A little further up the island was a girl my age, Tricia, who was also playing on her younger brother’s team. I felt some solidarity with her at the time and we later became friends and school teammates in volleyball, basketball and track in junior and high school.

My second year playing with the boys, second from left back row. My brother in centre of second row, and my bearded dad as one of the coaches

I don’t remember particularly loving soccer and I never played it to the level or passion of my friend Tricia, but I did it anyway, and had a few crushes on my teammates along the way 🙂 . It also prepared me physically well for my first real sport love when I discovered running on the track by 6th grade.

Through positive role modeling and support from my family, teachers, and coaches growing up I adopted the belief that I could pursue sport as long as I wanted to. However, I knew education and having a family were also important to me. I still distinctly remember giving myself a competitive timeline as a young runner; I would plan to run track competitively until I was 30 years old, that was my cut off to discover any potential I had.

As time went, I only ran seriously on the track until the age of 23 before moving on to cross-country mountain bike racing and then (mainly off-road) triathlon before finally shedding the largely consuming identity of “competitive athlete” one decade and two children later than I had predicted. I believe I had the age of 30 as a stopping point in my head when I was young because I equated having children with the end of the athlete identity and the start of the motherhood identity.

Fortunately I had the epiphany that my athlete identity did not need to end when my motherhood identity began, and I am thankful for all the support I have received to be able to merge the two. Just as the saying goes, it takes a village to raise a child, it also takes a village beyond the nuclear family to support, encourage and give mothers the space and opportunity to keep exercising and competing if they so desire. And now I’m thrilled to see more and more women balancing motherhood/family /career and other obligations with physical activity and competitive athletic goals at any level from recreational to the elite/professional level. 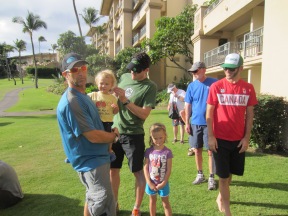 The support Posse on race morning!

I’m grateful that now in 2016 young all-girls soccer teams are thriving on northern Vancouver Island and elsewhere, and that females can do most any sport they’d like to at the same level as males. Thanks to the work over time of organizations like Team LUNA Chix, Women’s Sports Organization, Fast and Female, the Canadian Association for the Advancement of Women in Sport and Physical Activity (CAAWS),  and ZGiRLS to name a few, girls and women can find encouragement, support and community to pursue sport and continue to pursue athletic goals through education, careers, and motherhood.

I’m happy that my epiphany is now more and more commonplace 10 years later!