Many thanks to Sara Gross for being my first athlete-mom interview of 2012! I caught up with her for the first time this past year at the Calgary 70.3 in July where she finished 2nd just 7 months after giving birth to her daughter, Rosalee. After competing in Ironman Canada at the end of August and finishing 4th in a time of 9:46, Sara took the racing challenge up another notch a few months later when she went on to do two back to back Ironmans (yes that’s one week apart)!! In November Sara competed in Ironman Arizona and finished 8th in the Pro Division while running to a marathon PB (3:07) in a total time of 9:18. A week later, she competed in Ironman Cozumel and did not slow down much at all, while finishing 6th place in an impressive overall time of 9:56!

Sara also has a PhD in Ancient History and Religion from the University of Edinburgh. She works as a coach while living in Victoria, B.C. with her daughter, Rosalee and husband and personal coach, Clint. For more info on her coaching click here. You can also follow her on her personal website: www.saragross.ca. In the meantime read on about Sara’s transition into motherhood racing….

Top of the podium post-partum at Subaru Victoria Half-Ironman!

1. Can you tell me a little about your athletic/competitive background before becoming a mom?

Before my daughter was born, I had been a professional triathlete for 6 years. In that time I had collected 13 top 5 Ironman finishes and was ITU European Long Course Champion in 2005

2. What has motivated you to keep setting athletic and/or competitive goals since becoming a mother? Is it different than pre-children?

The thing that motivates me most is that I have not reached my potential in the sport. Finishing in the top 5 all those times and not winning an Ironman is frustrating and keeps me pushing forward. Though many things have changed since Rosalee was born, this central motivation has remained the same. 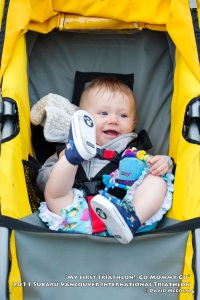 3. How do you balance training and/or racing with your family (and work?)?

The main thing that keeps me balanced is the amount of support I have. My husband (and coach) Clint understands that if I am going to compete against the best in the world we have to prioritize my training. My mental coach Bob (from Sportexcel) taught me how important it is to move easily from one role to another on a daily basis. So when I get home from training I quickly shift from athlete-mode to mom-mode, likewise when I am coaching I shift to coach-mode. Its amazing how much easier my life is if I don’t carry the baggage of a bad training session into the rest of my day. I also don’t have much time to stop and think about how I am feeling. If I am tired, I often don’t notice until I hit the pillow at night.

4. Did you train during your pregnancy? What was your approach?

I would not consider what I did during my pregnancy “training”, but I did exercise. I averaged about 1-1.5h/ day for most of the pregnancy, just easy swimming, biking and running. I ran up to an hour until week 32 and stopped because I could feel my baby’s head pushing down on my pelvis and it was just weird. I biked (mostly on the trainer) until week 37 and swam up until the day before she was born. I was anaemic during the middle part of my pregnancy, so I felt too fatigued to do any more than this. My main goal was just to keep myself sane. I had no illusions about maintaining my fitness. When I started training again after birth, I really was starting from scratch.

5. What were the biggest challenges getting back into shape after your daughter was born?

One of the biggest challenges for me was not being able to plan my days, weeks and months the way I had previously. My time was no longer my own. I had to get used to training on a whim. For example, if Rosalee fell asleep, I would get changed and jump on the trainer. Or if she had a bad night, I might need a nap instead. I found that if I kept my priorities straight in those first few months I could get in a decent amount of training, even if I couldn’t plan out the details like I used to.

Running to second place in the Calgary 70.3

6. Any advice you would give to other moms trying to stay active (or even competitive) while balancing life as a mom?

My best advice for new moms is to let go of any guilt associated with spending time away from your child. Finding people to take care of Rosalee who love her as much as I do was good for me and for her. I think that all women should get in the habit of taking care of themselves for at least an hour or two a day. Its good for our sense of well-being and is also a good example for our kids as they get older.

I have always wanted to have a great race in Hawaii (Ironman World Championships). In 2008 I finished 20th there having cramped up on the bike. The new qualifying system for pros means I have to race to earn points to get on the startlist, so that’s what I am doing this year. And of course, I am always looking for that elusive Ironman win! 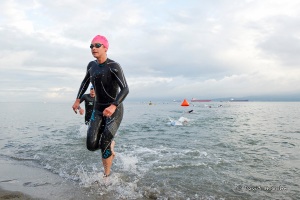