Although, I’m 99.9% sure I’m done with being pregnant, I’ve been asked quite often about training during pregnancy so I’ve been meaning to write a little about it while it is still somewhat fresh in my mind. If you are pregnant, or thinking of becoming pregnant and want to keep in shape, here are my top recommendations and motivational reasons to stay active over the nine months while you feel more and more like a beached whale 🙂

1. Read the book, “Exercising Through Your Pregnancy” by Dr James F. Clapp, M. D. He did some great studies of pregnant women from the non-active, recreational to the competitive and the book is packed full of great, solid research, and informational guidelines to follow. I’ve read it through 2-3 times, and some of my following points are based on the juicy details of studies you’ll find in this book. The book is an older one but I’ve found nothing recent that compares and most of the research and recommendations are timeless anyway.

2. Consider yourself in training for labour. You’ll increase your chances of a shorter, less complicated labour and chances of a quicker recovery. When you consider the average length of active labour is 2-4 hours, then a little extra stamina and endurance can only help! Getting to active labour isn’t always smooth sailing and pain free either! While predicting how any one labour will go or feel is about as reliable as your daily horoscope, like any unknown, the best you can do is prepare yourself as well as you can. Part of that is preparing your body physically for a possible ultramarathon painful intervals!

3. Keep moving because you’ll feel better. While I was lucky to never be physically sick for both pregnancies I did feel just plain “ugh” those first months and found that a workout always helped the feeling go away for a bit and helped me to sleep well a night. Swimming, which I did until the day of going in labour, felt so good for taking a load off while also keeping the circulation going!

4. You can increase your chances of delivering earlier at term. In the book mentioned above, 72% women in the “vigorous exercise group” who exercised an average of 71% of their prepregnancy levels of exercise before their due date versus 48% of “active control group” = rarely engaged in sustained exercise but occasionally played tennis, walked, gardened etc delivered earlier at term (later than 37 weeks). This rang true for me as Zoe came 5 days early and Nico came 7 days early. And those last couple of weeks are often the most tiresome!

5. You’ll stimulate better than average placental growth and funcational capacity. For exercising women the placenta grows almost a third faster by midpregnancy and has 15 percent more vessels and surface area at term – this also explains why stopping exercise in midpregnancy produces a bigger baby! Even just exercising 3 times per week for 20 minutes moderately hard to hard perceived exertion throughout midpregnancy is enough to see this difference.

6. Your baby can benefit. Babies of exercising women tolerate the stresses of late pregnancy, labor, and delivery better. Babies born of exercising women did better on a standard intelligence test at one year of age, and again at 5 years of age as well as remaining lean and scoring higher on oral language skills (when matched for mother’s physical activity after the birth and working outside the home, as well as sex, birth order, general health, breast-feeding, estimated caloric intake, family recreation profile, and type of childcare).

7. You have a better chance of having a lighter, “lean and mean” baby. Average birth weight for babies in exercise group in the book above was 14 ounces lighter (7 pounds 2 ounces versus 8 pounds). Exercising moms had babies who grew their brains, organs, muscles, and bones at same rate as non-exercising moms but babies didn’t get as fat in the process. In other words they were born lean and mean! The amount of exercise a woman did in late pregnancy increased the lean and mean effect so don’t slow down too much at the end! My babes were 8 and 9 pounds so they weren’t lighter, but they definitely weren’t too chubby!

8. You’ll gain less weight and deposit less fat. Pregnancy is definitely not a time to count calories or go on diets but exercise can help lessen the chances of excess weight gain. It also allows you to use that, “I’m eating for two” excuse more often 🙂 Continuing to exercise towards the end of pregnancy also can give you a great appreciation for what carrying extra weight can feel like and not take your regular weight for granted!

9. You may give yourself a postpartum competitive edge. Although highly variable between women, the thermal and cardovascular changes of pregnancy persist afterwards to a significant degree. The improved ability to dissipate heat along with higher stroke volume may account for some athletes improved performances after childbirth. For example, I read that during pregnancy blood plasma volume increases by 40-50%, red cell mass increases by 20-30%, cardiac output increases 30-40%, and the size of the heart increases by about 12%!! Lots of great advantages for an active mom and baby to make the most of!!

10. Let your body be your training guide! Finally, as a reminder of the importance of changing your training expectations in pregnancy here is an excerpt from a blog on our Luna Chix website that I wrote at 7 months pregnant with Nico:

“Currently I go out for a run that feels more like a plodding fast shuffle. Walking up stairs is as much of a workout as running up them used to be. I no longer even look at my swim splits in the pool. I feel the same tiredness after an hour of cycling that I normally would after three hours on the bike. Even bending over, putting on socks, and picking up my two and half year old daughter takes way more effort. But I don’t mind, it feels so good just to get out and get moving whenever I have the chance. While I originally had visions of keeping up my regular training program to high degree, I’ve relearned how much energy growing a baby actually takes and to readjust my “training” expectations.” 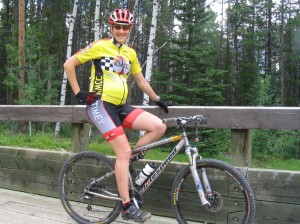