As the climax of another four-year summer Olympic cycle is rapidly approaching, intensity levels rise, and emotions are charged as dreams will be made and dreams will be crushed. There is a sense of urgency in the air as the time remaining to make the team or the Olympic standard is running out with each passing day.

As an athlete you may feel as if there is constant pressure – to beat the other(s), to impress, to please your supporters, to win the ultimate prize. With all the hard work you’ve put in there can be the fear of losing, coming up short, or failing to make the goal you’ve been striving towards for so long.

On the other side of fear and pressure is courage. In sport there are no guarantees. But choosing to go for it is to dare greatly. It is choosing to put your self out there, give it everything you’ve got and risk falling on your face, sometimes literally. As I watched the women’s most recent cross-country mountain bike World Cup race this past weekend in Albstadt, Germany, the eventual second place women’s finisher took a huge crash on her face at high-speed early on in the race, before shaking if off, getting going again, and coming back strong. Whether falling down literally or not, such moments can knock the wind out of our sails.

Overcoming the falls takes bravery and courage to get back up with pure grit, determination and resolve to find out what your potential really is? Even though failures are unwanted along the way, they are a time to pause and reflect; a time to embrace the emotional consequences and discomfort. In the moment of racing, it is the time to focus on simply doing the best you can. In the end there is no learning and a lot less self-discovery without accepting failures along the way. It means saying, no matter how far you get or how much you may feel is left undone, you can say, “I am enough”.

While most people spend their life on the couch, be proud to be one of the few that dares to step into the “arena”.

“It is not the critic who counts, not the man who points out how the strong man stumbled, or where the doer of deeds could have done better. The credit belongs to the man who is actually in the arena; whose face is marred by the dust and sweat and blood; who strives valiantly; who errs and comes short again and again; who knows the great enthusiasms, the great devotions and spends himself in a worthy course; who at the best, knows in the end the triumph of high achievement, and who, at worst, if he fails, at least fails while daring greatly; so that his place shall never be with those cold and timid souls who know neither victory or defeat.”

-Thomas Jefferson (epigraph from 1910 “Man in the Arena” speech)

Every four years the World pays attention to who is who at the Olympic Games. It has been four years since Vancouver but how many of us in Canada have really followed our 2010 stars such as Alex Bilodeau, Charles Hamelin, Christine Nesbitt, Maëlle Ricker etc through the incredible ups and downs of their 2011, 2012, and 2013 seasons? We see them as defending champions like it was yesterday but a lot can happen in four years. Winning a Gold medal is tough. Winning after winning can be even tougher. We often hear it is those who can merely survive the pressure that will come out on top when it counts.

Most of us can’t even begin to imagine the pressure some athletes feel while competing at the Olympics, especially as we sit, screaming at the TV with a beer in hand on our comfortable couch at home. However, in my humble opinion the ones that thrive rather than merely surviving are mentally aware and prepared for the following three factors:

1. Respect for the Luck factor! The best athletes prepare their best and take care of everything that is in their control. But as we can observe everyday in Sochi right now, sometimes equipment fails, or another athlete crashes someone out, the conditions can deteriorate, a body just doesn’t respond physiologically…the list goes on. Just watch our Short Track athletes for a little while and you’ll understand that luck is part of the game AND the excitement of it. Those that get angry and frustrated at every unlucky moment won’t have much mental stamina and toughness over the long haul!

2. Focusing on the Process. This is easier said then done but despite all the hoopla and distractions, the athletes that can stay focused on the simple, and previously well practiced, step by step routines of their performance – all the things that are in their control –  will give themselves the best chance of doing their personal best. They race for themselves, they compete and fight to the end by staying in every moment. I’ve often asked athletes to answer two questions in relation to a big performance goal: What is the worst thing that can happen? What is the best thing that can happen? If you can answer both and be prepared to face and accept both then you can be freer to just perform and enjoy the opportunity.

3. A Lasting Love. This may sound cheesy but the best performances often exude a real love and joy for the sport that transcends extra pressure and high expectations. Think of figure skaters who draw us in to their performance through their passion and joy of skating versus those going more mechanically through the motions. The former athletes have developed a perspective that their life in sport is a long journey and every moment is another opportunity to challenge themselves and grow. They handle the Olympic sized moments with the same attitude as any others – I love my sport, I’m glad you’re watching, and I can’t wait to show you what I can do today!

Perhaps ironically, those athletes that decide to define success in sport only by their Olympic moments, by winning or “losing” an Olympic medal, will only add undue pressure to themselves.

Finally, consider the wise words of Commander Chris Hatfield as he was interviewed as asked about his advice for athletes by Peter Mansbridge on CBC on January 20, 2014:

There are very, very, very few people who win Gold at the Olympics. If you say, “If I don’t win Gold than I’m a failure, or I’m letting somebody down or whatever”, then what if you win Silver? What if you win Bronze? What if you’re binding comes apart? What if Lufthansa doesn’t bring you gear? What if one of all those millions of things that happen in life happen? And only a few of the people who go there are going to win Gold….It is a very rare, singular moment in time (an event) in the continuum of life. You need to honour the highs, and the peak moments, you need to prepare your life for them. But recognize the fact that the preparation for those moments is your life. And in fact that is the richness of your life. And anybody who goes to these Olympics, shouldn’t just say, “Hey, I was at the Sochi Olylmpics” I would much rather hear them say, I prepared for the Sochi Olympics for twenty years and these are the things that happened and these are the things that I learned. And when I got to Sochi it was great and I did my race. And I placed 8th or 1st or 92nd. The challenge that we set for each other and the way that we shape ourselves to rise to that challenge is life.

With the 2012 summer about to start, here are a few of the mom’s I know of competing in London, each pictured below in full competition! If you know of any others please let me know and I can add them to this list of moms to cheer on! Click on the athlete’s name for to learn more about each “Olympic Mom”

Aretha (Hill) Thurmond, 35, USA (Athletics-Discus). Aretha was a teammate of mine at the University of Washington and went to her first Olympics as a sophomore. She has a five-year old son, and London will be her 4th Olympic Games. 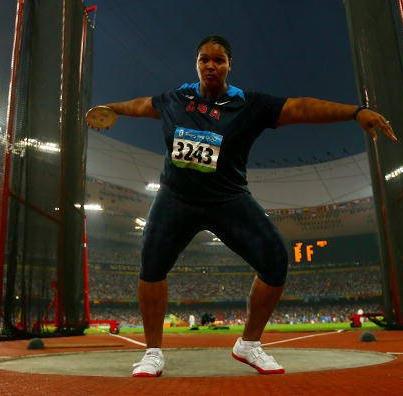 Jessica Zelinka, 30, Canada (Athletics – Heptathlon, 100m Hurdles). Jessica was 4th at the Beijing Olympics in Heptathlon and now has a 3-year-old daughter. She recently set a Canadian record in the Heptathlon and is the current Canadian Champion in the 100m Hurdles, in which she will also compete in London.

Gunn-Rita Dahle Flesjå, 39, Norway (Cross-Country Mountain Biking). Gunn-Rita won the cross-country gold medal at the 2004 Olympic Games and she is a multiple World Champion. She gave birth to her son in 2009 and won her first World Cup in four years in May showing she is in great form for her second Olympics!

Kara Goucher, 34, USA (Athletics – Marathon). Kara is a long distance runner with an amazing career, she competed in the 10, 000 meters at the Beijing Olympics. Her son Colt was born in September, 2010. She will be competing in the marathon in London.

Christine Rampone, 37, USA (Soccer). Christine plays defender as a member of the USA women’s soccer team. She has two daughters, ages 6 and 2. London will be her fourth Olympics! 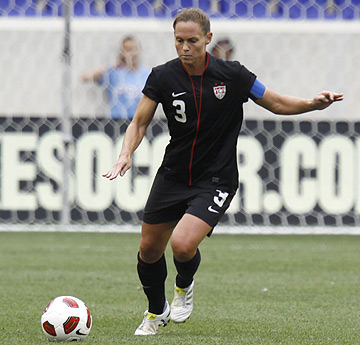 Kerri Walsh, 33, USA (Beach Volleyball). Kerri and her teammate, Misty-May Treanor were the gold medalists in the 2004 and 2008 Summer Olympics and have been called “the greatest beach volleyball team of all time!” Since Beijing she has given birth to two sons, ages 2 and 3! London will be her fourth Olympics!